In a nutshell, our founding team includes Fred and Natasha Ruckel: most recently inventors of the Ripple Rug. More about the founders can be read in biographies below.

However, we feel it’s important to address why we called this organization the ‘Randy Cooper Foundation’.

While we (Fred and Natasha), were trying to identify who had created a national TV campaign for a knock-off using our very own ‘Ripple Rug’ product, we uncovered several other knock-offs marketed by unscrupulous bad guys. One of the knock-offs in question was the ‘Spyder Sprinkler’. Further investigations led us to the original product, which is called the NoodleHead Sprinkler. We reached out to Noodlehead Sprinkler using the contact information on their website, and were very sad to learn that Randy Cooper, the inventor, had passed away. On talking more with Marlene, Randy’s wife, we discovered that they had been fighting knock-offs of their sprinkler for many years, bringing a significant degree of stress and financial hardship as a result.

The more we learned of Randy Cooper, the more we were impressed with his creativity, his determination, his courage, his professionalism and his dream of helping other inventors, while still creating his own inventions. To us Randy embodies the spirit of the American Inventor. We hope that through this foundation we can uphold Randy’s honesty, integrity, generosity and drive to make the world a better place. 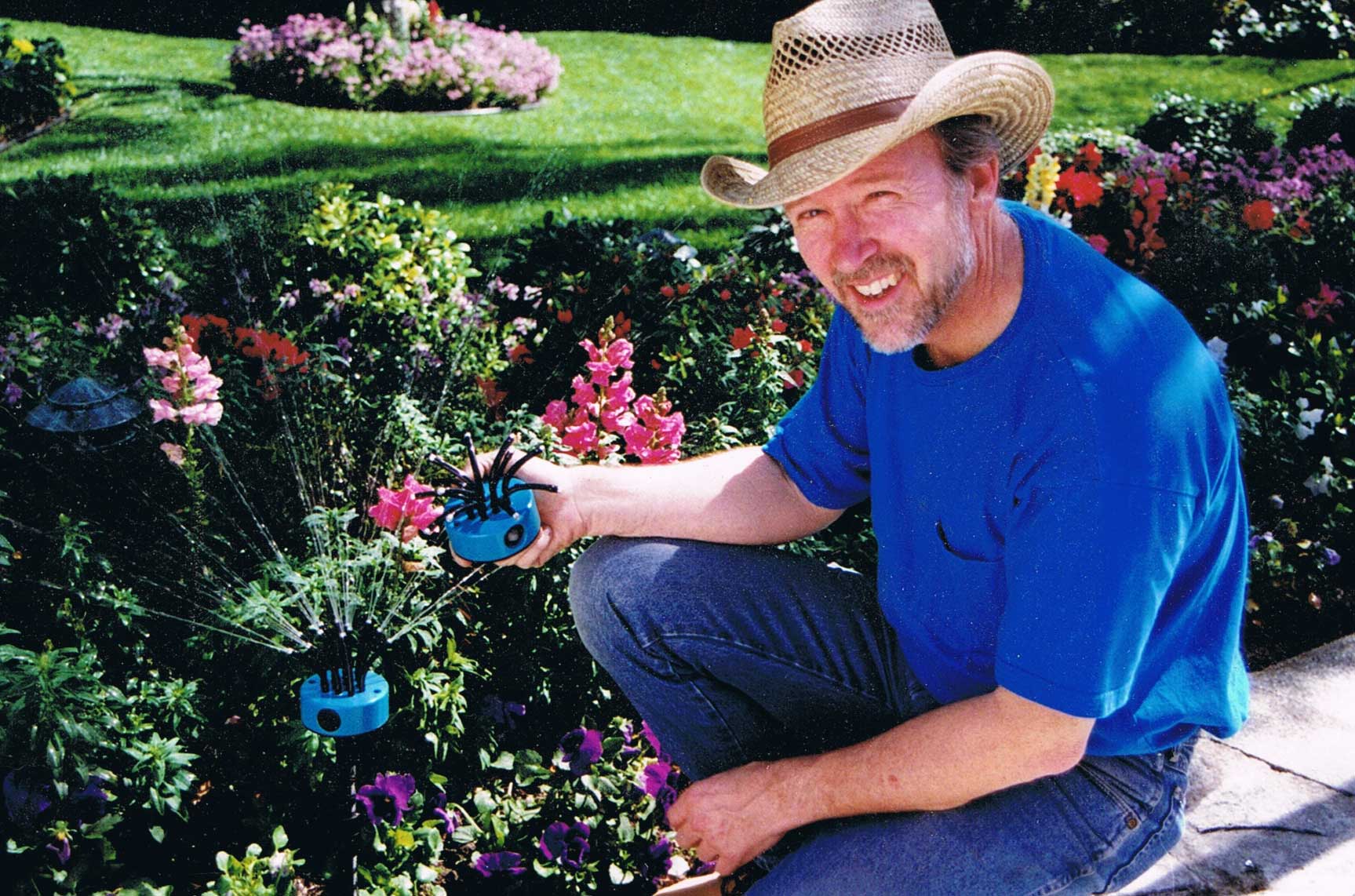 Randy Cooper with his invention The Noodlehead Sprinkler

Randy Cooper was a mechanical design engineer for 35 years. Since 1987 he had been creating designs in AutoCad.

He was a first born of three brothers and raised in Illinois.

When he was young, he was a paper boy, an altar boy, and an eagle scout. He also worked as  a supermarket produce clerk, he delivered pizzas, he bussed tables and he worked in loading docks.

However, his first big break was when he  got his first “real” job as a Draftsman. Thereafter Randy continued to design throughout his life. 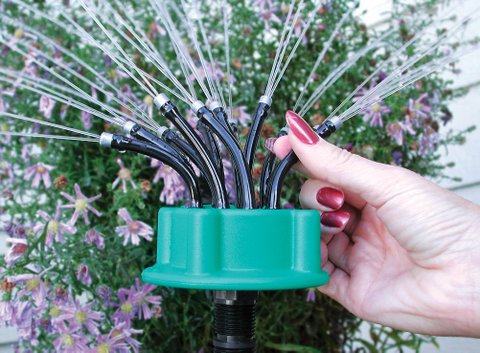 As an avid gardener, who lived on a steeply sloped property, Randy had trouble finder a sprinkler that could solve his watering problems. Randy was disappointed that of all the water systems on the market, none seemed to get the job done. They all appeared to have shortcomings. After watching his wife put ‘Benders’ in her hair, Randy had the ‘eureka’ moment and started to develop prototypes. After years of development and refinement, the Noodlehead was accepted for patent by the United States Patent and Trademark Office and received Patent # 5,826,803.

Randy’s previous inventions included: the Windex trigger sprayer; the Beckman heavy duty multi-meter, an electronic testing device; the toilet for the Boeing 757; the Rainbird Impulsilator (an oscillator sprinkler that uses an impulse drive instead of the usual turbine drive); the Dancing Waters oscillator sprinkler and the 6-station solid state Irrigation Controller.

Randy also built, from scratch, the world’s first mid-engine Corvair by stuffing a 327 cubic inch V8 into where the back seat used to be.

During the early 90’s Randy made the decision to work for himself rather than a corporation. It took him a little longer to actually implement that decision.

Randy became disillusioned with working for a large corporation. He felt that he worked really hard for a little paycheck, and then others took credit for his ideas The big kicker for Randy, was when he lost his job,  through no fault of his own. At the time he was working at a manufacturing facility, where 140 engineering personnel were fired at the same time.

It was observed, by one of Randy’s friends, that Randy accomplished more in just one day, than most people could in a week and that his work ethic was a true inspiration. When asked why the relentless desire to improve virtually everything he encountered; Randy would reply that he just wanted to make the world a better place.

We understand the difficulties and pitfalls faced by inventors. As inventors, we’ve been there. To this day, we still grapple with different disciplines daily. The biggest struggle is: not having enough hours in the day, not enough money to finance the invention and not enough expertise in every field. There are just so many facets of turning an idea into a million-dollar selling product.

Perhaps you’ve invented the best thing since sliced-bread. Or perhaps you’ve just discovered a better way to slice bread,  Whichever scenario applies to you, you’ve still got a long way to go before having a successful product. It’s difficult to find a viable way to manufacture, distribute and market your product. That’s only half of the battle. You’ll need to protect your invention, your trademarks and your copyrights, to name but a few things. All of this boils down to you’re going to need help, because it’s very difficult to successfully control all of these aspects by yourself.

The idea for a foundation to support home-grown inventors was born. The Randy Cooper Foundation is a pro-bono help division of RuckSackNY. 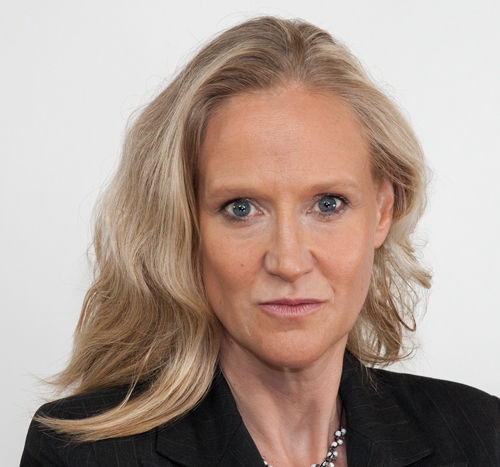 Natasha has over 25 years of experience in branding and marketing.  Her career started at a digital television graphics computer manufacturer based in the UK (Quantel).

Whilst at Quantel, Natasha started as a Graphic Designer, but soon progressed to Product Demonstrator then Product Manager.  While there, she spent time at the BBC News & Current Affairs Department, as well as several other large broadcasters around the world, providing training and graphics to well-known networks (e.g., NBC, CTV and FOX to name but a few).

During 2002, Natasha joined the EMEA Media & Entertainment Division of Autodesk, based in London, UK. Natasha evolved the

Natasha then relocated to Montreal, to the worldwide headquarters of the Media & Entertainment Division of Autodesk. The role required creation of all global marketing for new product launches targeting the television post-production industry.

Eighteen months later, Natasha moved to NYC, where her role as Social Media Director at a billion-dollar global consulting company (Resources Global Professionals, NY, NY), was to direct the social media initiative in a highly-regulated legal and financial environment.

Natasha then became Creative Content Director at Momentum (Manhattan-based digital agency), where she was responsible for writing, producing and directing a range of content, (e.g. video and VP/executive presentations for notable clients such as American Express, American Express OPEN – The Small Business Division, Microsoft, Google and William Grant). Working on the American Express OPEN account afforded Natasha the opportunity to help develop strategy and content for several large small-business summits, e.g. The New York Times Small Business Summit, NY, NY. Working with OPEN also allowed Natasha to meet and work with many small business owners and entrepreneurs, whose resilience and imagination inspire her still to this day.

During 2015 Natasha and Fred decided to try bringing a brand new innovation to the market the Ripple Rug.

Together Natasha and Fred launched, managed the manufacturing, marketed and turned the Ripple Rug into a million-dollar revenue-generating pet product. 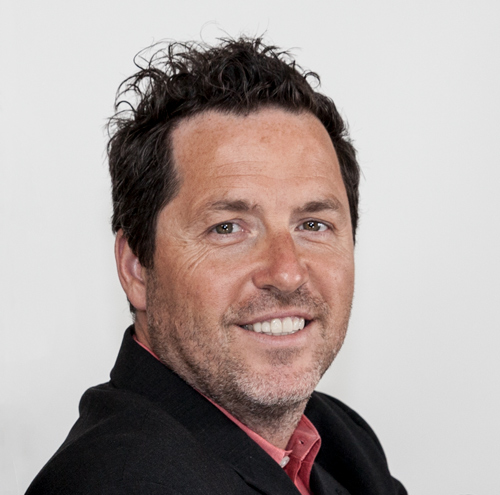 Fred has over 25 year’s experience in traditional and digital advertising. He currently holds the role of Creative Director and inventor. During his career, he has held positions such as Director of Technical Operations, Engineer, Visual Effects Artist, Executive Producer, Producer, Video Editor, Colorist, Media Encoder, Information Technology Forensic Investigator, and Technology Consultant.

Fred created digital billboard advertisements for the Nasdaq building, Reuters and ABC in Times Square; the banner and main screen in Madison Square Garden, the Jumbotron at the US Open and the Fuji blimp.